Skip to content
2017-10-27 Obducat enters into financing agreement with Blue Ocean
NOT FOR PUBLICATION, DISTRIBUTION OR RELEASE, DIRECTLY OR INDIRECTLY, IN OR INTO THE UNITED STATES OF AMERICA, AUSTRALIA, JAPAN OR CANADA OR ANY OTHER JURISDICTION WHERE PUBLICATION, DISTRIBUTION OR RELEASE WOULD BE UNLAWFUL. THIS PRESSRELEASE DOES NOT CONSTITUTE AN OFFER OF ANY SECURITIES OF OBDUCAT.

Obducat AB (publ) ("Obducat" or the "Company") has entered into an agreement with Blue Ocean Investment Group's ("Blue Ocean") investment vehicle European High Growth Opportunities Securitization Fund regarding a financing solution based on issuance of convertible bonds and warrants.

Under the agreement, Obducat is entitled, but not obliged, to issue convertible bonds to Blue Ocean within a period of 24 months and on up to eleven occasions, of in total not more than SEK 35 million. The first loan shall amount to SEK 5 million and the ten subsequent loans to SEK 3 million each. The proceeds thereby received by Obducat will be used by the Company for working capital purposes.

The convertible bonds will be issued automatically and periodically, subject to any suspension period decided by the Company, and will be converted into ordinary class B shares of the Company not later than twelve months from the issuance. The convertible bonds are issued at a price of 95 percent of the nominal amount and the conversion rate amounts to 95 percent of the lowest closing volume weighted average price ("VWAP") of Obducat's ordinary class B shares during a period of 20 trading days immediately preceding the request for conversion. Obducat is entitled to, upon request for conversion, partially or fully, redeem the debt in cash.

In connection with each potential convertible bond issuance pursuant to the above, Obducat will, free of charge, issue such number of warrants that entitles Blue Ocean to subscribe for additional ordinary class B shares of the Company for an amount corresponding to 30 percent of the nominal amount of each convertible bond, respectively. The strike price for the warrants amounts to 120 percent of the lowest VWAP for Obducat's ordinary class B shares during a period of 20 trading days immediately preceding the issuance of new convertible bonds.

Further, Obducat will pay a so-called commitment fee to Blue Ocean, corresponding to five percent of Blue Ocean's total commitment under the agreement. Such payment will be made in connection with Obducat's requests for the first five convertible bonds and will be made by issuance of new ordinary shares of class B (corresponding to one percent) and by cash payment (corresponding to the remaining four percent). The price for the shares thereby issued will be determined in the same manner as the conversion rate, as set out above.

When applicable, Obducat intends to resolve to issue convertibles, warrants and shares as set forth above based on the authorization resolved by the annual general meeting on 29 May, 2017.

Pierre Vannineuse, CEO and Founder of the London based Blue Ocean I.G, and manager of the European High Growth Opportunities Securitization Fund, comments:

"Blue Ocean is particularly proud to initiate its first transaction in Sweden with Obducat, the world leader in equipment for nano lithography. As the team is fairly experienced with highly competitive and technological leader investments, we know for a fact that the business model prevents comprehensive disclosure to the fullest extent of the real-time achievements and market opportunities seized or identified. We are fully supportive and confident in the Management's ability to allow for the share price to reflect the fundamental underlying value."

This is information that Obducat AB (publ.) is obliged to make public pursuant to the EU Market Abuse Regulation. The information was submitted for publication, through the agency of the contact person set out below, on October 27th, 2017 at 08.00 CET.

European High Growth Opportunities SF is an institutional investment vehicle based in Luxembourg focusing on financing highly innovative companies on a pan European basis which it considers highly undervalued. EHGO is funded out of the Blue Ocean Partner's Equity and is exclusively advised by Blue Ocean Advisors Inc. Its mandate is to invest in highly innovative European companies while supporting their needs for growth capital and offer a credible European alternative to funding.

Blue Ocean advisors was founded by Pierre Vannineuse and is the investment manager to a family of funds with approximately $300 million in assets under management. Blue Ocean specializes in providing flexible, innovative and non-invasive debt and equity financing to publicly listed companies across the world and in a variety of sectors including healthcare, energy, mining and technology. 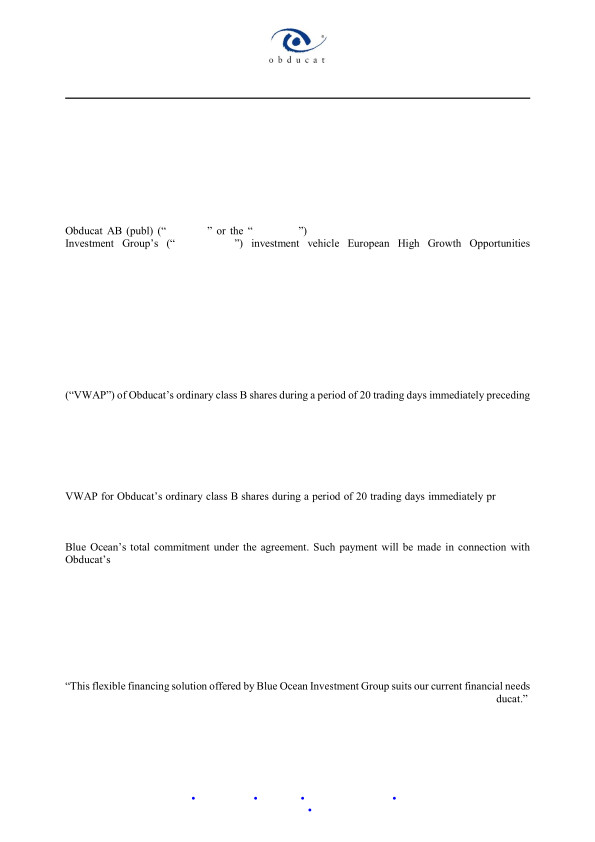