OBDUCAT AB (publ) subsidiary Obducat Technologies AB, a leading supplier of lithography solutions based on nanoimprint lithography (NIL), has received an order from Temasek Polytechnic in Singapore for an EITRE 3 NIL system. The order value amounts to approx. 800 KSEK.

The Obducat nanoimprint system will be installed at the Temasek Microelectronics Centre which is one of 7 Centres of Excellence at Temasek Polytechnic. Others include a centre for Biomedical Engineering Research, and a centre for Clean Energy Research.

The Temasek Microelectronics Centre is a multi-disciplinary Centre focusing on the development of microtechnology-based systems and devices, such as biosensors, microfluidic chips, light-emitting diode, surface acoustic wave devices, and other state-of-the-art microsensors and systems.

The EITRE system is scheduled to be delivered to the Temasek Microelectronics Centre in February 2018.

This is information that Obducat AB (publ.) is obliged to make public pursuant to the EU Market Abuse Regulation. The information was submitted for publication, through the agency of the contact person set out below, on December 8th, 2017 at 11.00 CET.

Obducat AB is an innovative developer and supplier of technologies, products and processes used for the production and replication of advanced micro and nano structures. Obducat's products and services serve the demands of companies within the LED, OLED, semiconductor, displays, biomedical and MEMS industries. Obducat's technologies include nano imprint technology, coating technology and wet processing technology. Obducat has offices in Sweden, Germany and China and the headquarter is located in Lund, Sweden. The Obducat shares are publicly traded on the Swedish NGM Equity stock exchange. Read more at www.obducat.com. 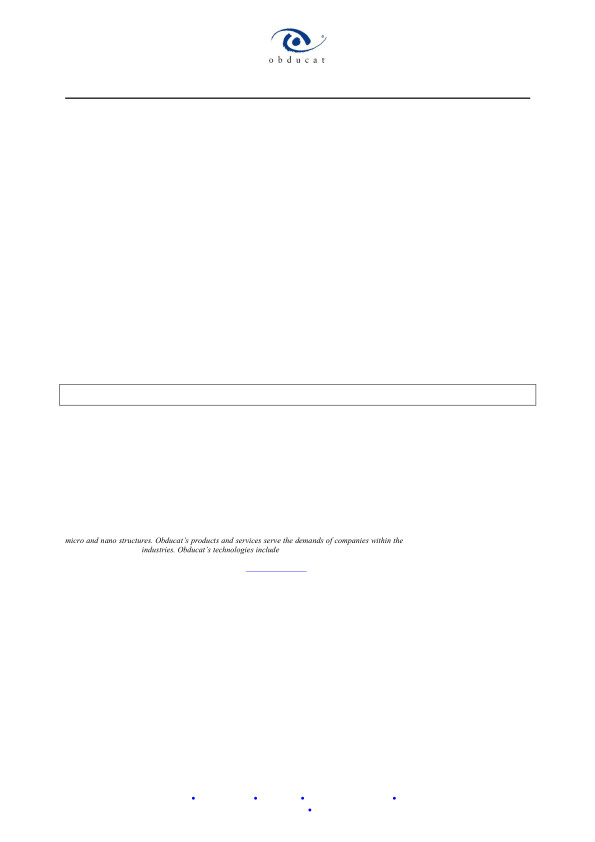