Skip to content
2017-05-23 Obducat receives order from FEMTO-ST in Besancon – France
OBDUCAT AB (publ) subsidiary solar-semi GmbH, a leading supplier of system solutions for lithography processing, has received an order from FEMTO-ST in Besancon – France, for the supply of a QSW 300 SM system to be used for Piranha-, Solvent- and High-Pressure Cleaning. The order value amounts to approx. 211 KEUR.

The QSW 300 SM system will be installed in the cleanroom facilities of the Microfabrication Technology Center in Besancon. FEMTO-ST is a European research laboratory that conducts research and development in a broad field of applications like Acoustics, Applied Mechanics, Automation Control, Computer Science, Energy, Micro & Nanotechnologies, Optics & Photonics, Time & Frequency.

The QSW 300 SM system is planned to be delivered in September 2017.

This is information that Obducat AB (publ.) is required to disclose pursuant to the Swedish Securities Market Act and/or the Financial Instruments Trading Act. The information was submitted for publication on May 23rd 2017 at 11.30 CET.

About FEMTO-ST in Besancon – France

The FEMTO-ST Institute "Franche-Comté Electronics Mechanics Thermal Science and Optics – Sciences and Technologies", is a joint research institution, created on January 1st, 2004 in the French region of Franche-Comté through the merger of five local laboratories which thus comprised the institute's first departments.

In 2008, the existing departments were restructured for greater scientific coherence and two new laboratories were included; FEMTO-ST was thus reorganized into six research departments:

Later, in 2012, the inclusion of the Franche-Comté Laboratory of Computer Science (LIFC) led to the creation of the seventh scientific department :

Today, in FEMTO-ST's scientific departments and general services, we count a total staff of more than 700.

Obducat AB is an innovative developer and supplier of technologies, products and processes used for the production and replication of advanced micro and nano structures. Obducat's products and services serve the demands of companies within the LED, OLED, semiconductor, displays, biomedical and MEMS industries. Obducat's technologies include nano imprint technology, coating technology and wet processing technology. Obducat has offices in Sweden, Germany and China and the headquarter is located in Lund, Sweden. The Obducat shares are publicly traded on the Swedish NGM Equity stock exchange. Read more at www.obducat.com and www.solar-semi.com 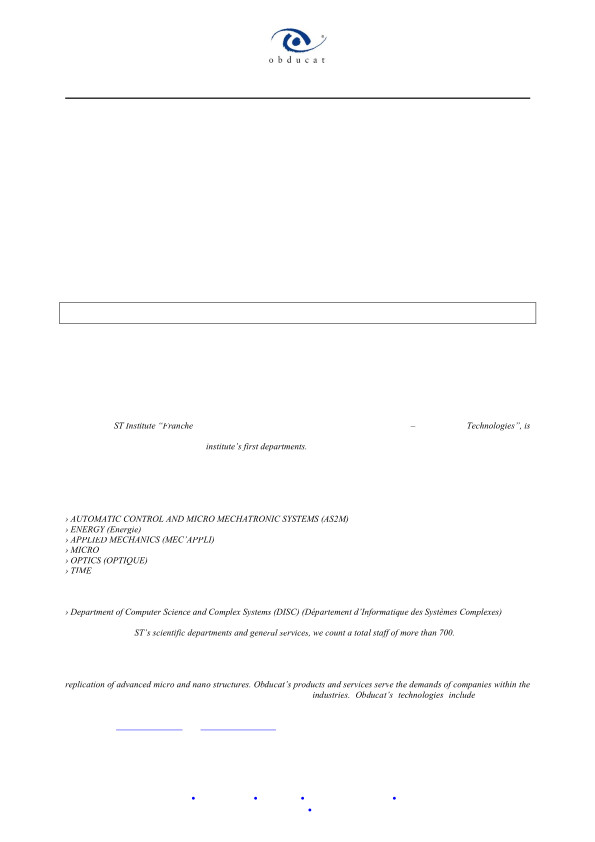