Skip to content
2022-04-05 Obducat receives orders for production service to a value of approximately SEK 1.3 million

One customer is a European player in the field of photonics and the order now received is a follow-up order within the framework of a pilot project that is progressing according to plan, and which was started in the autumn. The project is expected to be completed in 2022.

The other customer is an Asian player active in meta lenses. The order refers to an evaluation project in which Obducat will use its patented NIL technology to produce a pre-series of tests on behalf of the customer. The project is expected to be completed in 2022.

Both projects have the potential to lead to longer delivery agreements with Obducat regarding continuous production. Due to confidentiality requirements, no further information can be provided.

Obducat AB (publ) is an innovative developer and supplier of technologies, products and processes used for the production and replication of advanced micro and nano structures. Obducat's products and services serve the demands of companies within the LED, OLED, semiconductor, displays, biomedical and MEMS industries. Obducat's technologies include nano imprint technology, coating technology and wet processing technology. Obducat has offices in Sweden, Germany and China and the headquarter is located in Lund, Sweden. Obducat is a public company. Obducat's shares are traded on the Swedish NGM Main Regulated Equity exchange. Read more at www.obducat.com. 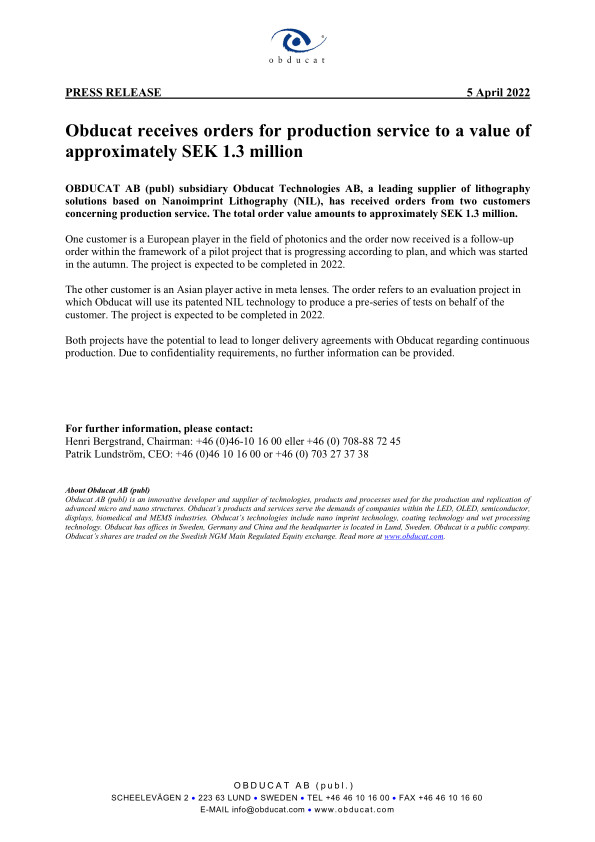