The board of directors of Obducat AB (publ) ("Obducat" or the "Company") has requested the first convertible loan, amounting to SEK 5,000,000, from the investor European High Growth Opportunities Securitization Fund pertaining to the Blue Ocean Investment Group ("Blue Ocean"), in accordance with the financing solution announced by Obducat through a press release on 27 October 2017.

The convertible bonds are issued at a price corresponding to 95 percent of the nominal value, which means that Obducat is provided with SEK 4,750,000. Their conversion may be requested, in full or in part, by the convertible holder during the next twelve months. The conversion price amounts to 95 percent of the lowest closing volume weighted average price of Obducat's ordinary shares of series B during twenty trading days immediately prior to a request for conversion.

The convertible bonds are issued with 789,473 warrants attached, that entitle Blue Ocean to subscribe for additional 789,473 ordinary shares of series B within 24 months, at a subscription price of SEK 1.9 per share. The warrants are issued free of charge. At full exercise of the warrants, Obducat will be provided with approximately SEK 1,500,000, corresponding to 30 percent of the nominal amount of the convertible bond.

Further, the board has resolved on a directed share issue of 184,210 ordinary shares of series B shares to Blue Ocean, fully paid-up by way of set-off against the amount of a so called commitment fee due by Obducat to Blue Ocean. The subscription price corresponds to SEK 1.9 and has been established in the same manner as the conversion price, as set forth above.

The board's issue resolutions have been made based on the authorization from the annual shareholders' meeting on 29 May 2017.

This is information that Obducat AB (publ.) is obliged to make public pursuant to the EU Market Abuse Regulation. The information was submitted for publication, through the agency of the contact person set out below, on December 1st, 2017 at 11.00 CET. 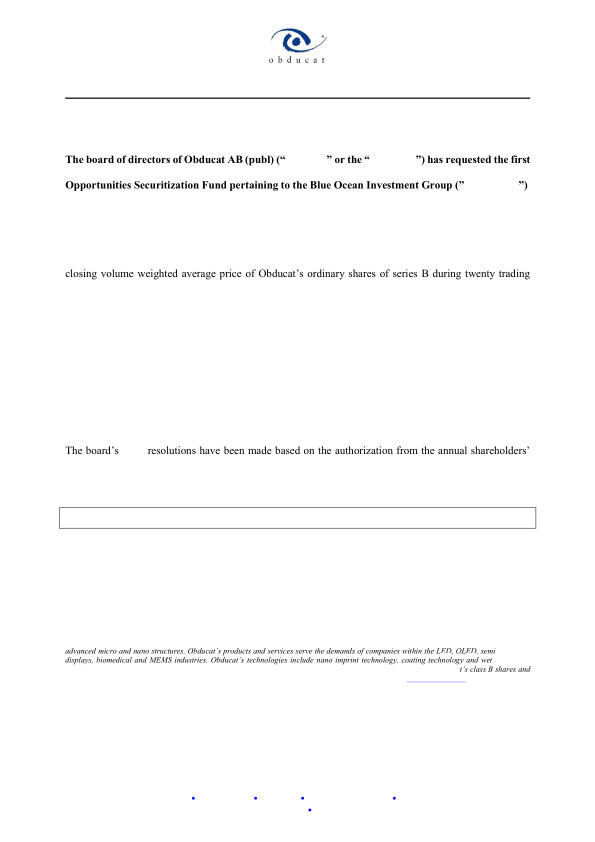