Obducat AB (publ) is pleased to advise that the name of its subsidiary solar-semi GmbH has been formally changed to Obducat Europe GmbH by registration in the German trade register.

The solar-semi website, www.solar-semi.com, will be integrated with the Obducat website www.obducat.com the coming month. The email addresses of solar-semi employees will be changed to firstname.surname@obducat.com.However, in the meantime, emails sent to the solar-semi domain will automatically be re-directed to the Obducat domain.

No changes other than those associated with the change of name to Obducat Europe GmbH have been made. The company's operations, personnel, registration number, registered address and phone number remain the same.

Obducat AB (publ) is an innovative developer and supplier of technologies, products and processes used for the production and replication of advanced micro and nano structures. Obducat's products and services serve the demands of companies within the LED, OLED, semiconductor, displays, biomedical and MEMS industries. Obducat's technologies include nano imprint technology, coating technology and wet processing technology. Obducat has offices in Sweden, Germany and China and the headquarter is located in Lund, Sweden. Obducat's class B shares and preferential class B shares are publicly traded on the Swedish NGM Equity stock exchange. Read more at www.obducat.com and www.solar-semi.com . 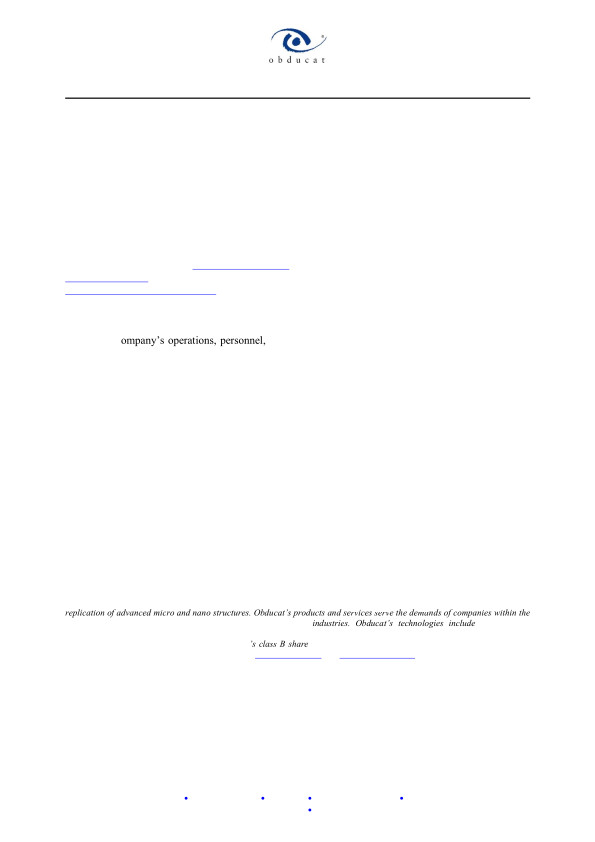